What is Considered A Dental Emergency? »

We are delighted to announce that we won five awards at the prestigious Private Dentistry Awards on Friday 4th November and we are now a multi award winning dental practice! We were shortlisted amongst many amazing dental clinics and we absolutely thrilled to bits to walk away with five awards and become an award winning dental practice. Read on to find out what we won, and to read about our incredible evening and see lots of pictures from the night.

How We Became a Multi-Award Winning Dental Practice

The event took place at the amazing Park Plaza Hotel, Westminster Bridge in London. The night began with a champagne reception at 6pm followed by a gorgeous 3 course meal. After this, the awards began following opening speeches by some of the most prestigious leaders in the dental field. The submissions were judged by an outstanding selection of amazing dental professionals with a wealth of experience, and the competition was fierce to say the least! We were up against some incredible private dental practices and the nerves were peaking by the time the ceremony started! We really wanted to become an award winning practice!

The first to be announced was BEST NEW PRACTICE, which we won and no sooner had we sat down after receiving the award than we were called up to receive the next one, MOST IMPROVED PRACTICE! We were not expecting for one second to win both of these awards, especially in such quick succession! The list of finalists was long and impressive so we were completely overwhelmed at this point, and really would have been happy to walk away with just these two awards.

After this we had a bit of a break to catch our breath before we had to listen to the next category we had been shortlisted for, best Practice Manager…..which we also WON!! Unfortunately Mandy could not be there to accept it due to the train strikes that weekend so Gemma accepted in on her behalf and presented it to her on Monday morning back at the practice!

Soon after this award was presented to us, they were announcing the winners of best Patient Care. This was an important one for us because patient care is at the forefront of what we do, it is what’s most important to us. To be recognised for providing the best patient care out of so many other clinics would have been an amazing accolade so we were extremely nervous at this point. As we were waiting for them to announce the winner we gripped each other’s hand tightly and jumped up in excitement when our names were read out….AGAIN!

So, now that we had collected four awards we were thinking that we stood a good chance of winning the biggest award, Best Practice 2022. We would still have been absolutely delighted with what we had won but this would have been the icing on the sugar-free cake!! Anyway, I think you can guess what happened… we won, making us a multi-award winning dental practice! 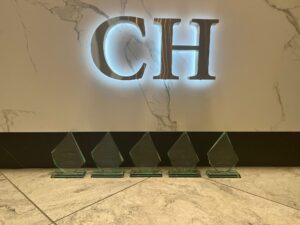 To watch a video of our amazing night: https://www.youtube.com/watch?v=HvmoT7qLiLw

To see what treatments we offer at our award winning dental practice: https://www.cheadlehulmedental.com/treatments/